Remembering the past... planning the future

on April 03, 2011
When I was little, i was a huge fan of Mary-Kate and Ashley Olsen. I had thousands of fotos, magazines, movies and everything with their... faces :) I had a very big collection and I was so proud that I´ve made it (´cause I never collected anything), well I still have it, but not here. And today, looking for some news or gossips or at least some new fotos of the girls, I found out that they wrote a book!!!! yess... so unbelievable. 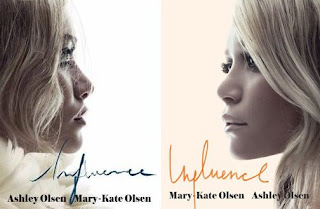 Like someone wrote , ¨INFLUENCE¨ is a book about designers, photographers, fashion show producers, artists and overall creative people that have influenced Mary-Kate and Ashley Olsen and inspired their keen fashion sense. The book features interviews with the likes of Karl Lagerfeld, Chanel Creative Director; Diane Von Furstenberg, Designer; Richard Prince, Artist; Alexandre De Betak, Fashion Show Producer and John Galliano, Head of Design at Christian Dior and his namesake label. Mary-Kate and Ashley Olsen ran around Paris during fashion conducting their interviews. In an interview about the book the twins mentioned that before this book they never interviewed anyone before.
And now... now I am looking forward to read it...  there are just two problems: to find the book, and then money !