on January 23, 2014
FITUR 2014, MADRID, SPAIN
Since yesterday night the media exploded! Everyone talks about the controversial/ outrageous / unbelievable marketing which one of Mediterranean Coast cities used at the biggest travel fair in Spain, FITUR.

I always say: Who am I to judge?
But please, really?

Well I think, it was a powerful move (bad and good at the same time) but let me say: too stupid!

The way they were promoting (EVEN IF JUST the DISCO) can show us what type of entertainment they have there which consequently shows their target market (type of travellers they are expecting).

This is why it is good:
1. It is quick
2. Effective
3. Better to see once than hear about it a thousand times.

At the same time this is truly bad because:
1. There are already tourism destinations in Spain were this kind of entertainment worked for ages, and they are very good known for the best discos and night life from the whole Spain! This area is BUSY!

2. Gandia already has a powerful reputation about its crazy night life/ nice girls /some entertainment etc. after a well known all over the Spain reality show "Gandia Shore" which is exactly the same as "Jersey Shore" but in Spain, in Gandia and with Spanyards. My boyfriend and I watched some of the chapters and we couldn´t more! The young people stupideness sometimes is off the limits, and we were so ashamed to even look at it! You can imagine now why it was so wrong to let this "private" company in!

3. And the last thing that comes to my mind right now (and it is adressed for those who work in Tourism Boards) sometimes it is really necessary to read about the tourism visions/targeting/trends/ of the country, the province, nearby cities for this and future years. It is not always good, and it doesn´t work all the time to be the black sheep.

Extra: For those who want to see some pictures from Cultural Gandia which I took while "traveling alone" click HERE. 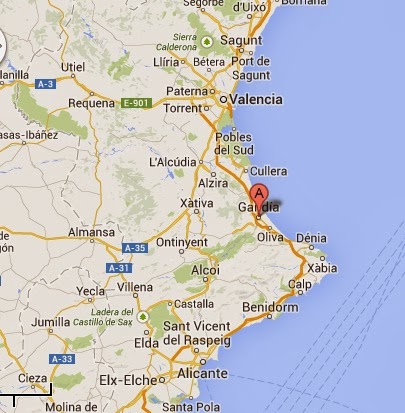